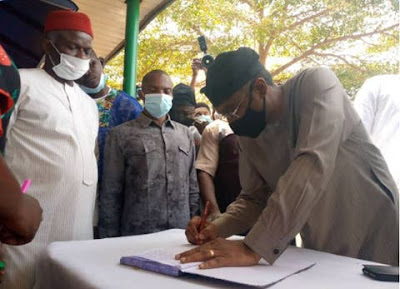 The Speaker of the House of Representatives, Femi Gbajabiamila, has met with newspaper distributors and vendors in Abuja over the killing of one of them, Ifeanyi Okereke.

Okereke was allegedly killed by one of Gbajabiamila’s security aides on Thursday.

Leaders of the distributors and distributors, in their separate speeches, noted that Gbajabiamila had always identified with them on the streets of Abuja, stating that the protests by them were not against the Speaker but to seek justice for Okereke.

The Speaker had earlier on Saturday visited the family of the slain newspaper vendor at Okereke’s family home in Kwata village in the Madalla/Suleja area of Niger State.

The incident, which occurred at the Federal Secretariat, Abuja, around 3 pm on Thursday, had caused panic in the area.

The victim was taken to the National Hospital by his brother and some police officers, where he eventually died.

Gbajabiamila had later confirmed that the killer security aide is an operative of the Department of State Services.