FG trying to silence me by freezing my account, says #EndSARS activist 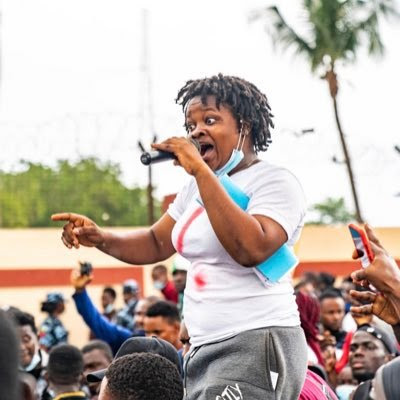 Racheal Oduala, a promoter of the #EndSARS campaign, says the federal government is trying to silence her by freezing her bank account.

NigerianEye had reported how the Central Bank of Nigeria (CBN) obtained a court order to freeze the accounts of 19 individuals and a public affairs company linked to the #EndSARS protests.

Oduala is one of those affected by the court order.

In an article, the activist decried the development saying it is a wrong way of treating young people demanding a better country.

Oduala said she is not afraid of the government’s plot as the demands of young persons are not beyond their constitutional rights.

“I am not afraid—I am only disappointed that this country will treat me this way. Nigeria is all I have, and I have a right to demand that it works for all of us, not just those with influence, wealth, or a government position,” she said.

“In a country that people have been voiceless for a long time, people holding the government accountable is being seen as too much? How can we ensure that this sort of thing will encourage people to build a new Nigeria?

“A Nigeria that will be filled with accountable government officials, where all forms of oppressions and injustice is a thing of the past. How do you expect me as a part of the future of this country to still believe in a country who thinks they have the right through CBN to freeze my account for no just cause.”

Oduala said she agreed to be a youth representative on the Lagos judicial panel to show that the protest was not to fight the government.

She lamented that the government sees her existence as a threat despite how she struggles to make ends meet.

“We called for among other things, a probe into the killings and torture of people and the government agreed by setting up judicial panels. In order to assure young people of the independence and fairness of the panel I took up the role as a youth representative at the detriment of my education, personal life and family,” the activist said.

“I did this to make peace. I did to ensure our young people understood that the only way to create a better and safer Nigeria is to do things lawfully. Why am I still being targeted for lending the government my good will.

“I study, selling hoodies and other clothing for ₦5,000 to pay my school fees. I also do the odd bit of freelancing, taking on some brand influencing work to ensure my family doesn’t suffer. Somehow, however, my existence threatens my government, the fact that I have a voice is enough for them to try to silence me.

“I decided to use the only currency I have, my voice to speak up against extrajudicial killings, torture, extortion and unjust harassment that is still happening in a democratic nation in the 21st century! The government also agreed that reform is inevitable and promised us they were going to listen so why punish the same people that are speaking up?”