Femi Otedola praises his daughter, Temi for her role in movie 'citation' 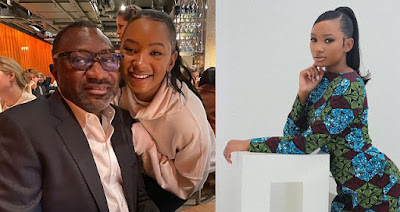 Billionaire businessman, Femi Otedola has described his daughter Temi as “The new biggest actress from Africa.”

The excited father took to social media to gush about his daughter after Temi’s debut movie, Citation, was released on Netflix.

“The new biggest actress from Africa! Temiloluwa (@temiotedola) I’m so proud of you,” Mr Otedola wrote on Monday in an Instagram post.

Citation tells the story of Moremi Oluwa (Temi), a fun-loving 21-year-old student on campus in Nigeria. Enraged at being ill-treated by a trendy university don, Lucien N’Dyare, she drags him before the University Senate.

The film is broadly based on true events.

The movie was directed by Kunle Afolayan, written by Tunde Babalola and starring Jimmy Jean-Louis, Temi Otedola and Bukunmi Oluwashina.