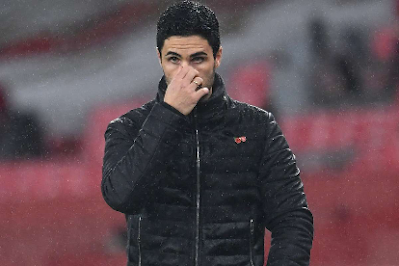 Arsenal manager, Mikel Arteta, hit out at his players following a 3-0 loss to Aston Villa on Sunday.

The Gunners were favourites to win their home fixture, after beating Manchester United 1-0 last weekend.

However, they went behind to Bukayo Saka’s own goal, before Ollie Watkins netted a second-half brace at the Emirates.

It was Arsenal’s fourth defeat in eight matches and Arteta made no excuses for his side afterwards, but took full responsibility for the defeat.

He said: “First of all congratulations to Aston Villa for the way they played and the victory.

“After that obviously we perform below our standards and I have to say since I was Arsenal manager it was the first time I’ve seen us play and we were not a team.

“I take full responsibility. We did not start the game well enough. We got away with the situation with VAR because of the offside situation, but straight after that we lost all the races, all the duels, we were sloppy on the ball and when we created the chances to score we didn’t even hit the target.”