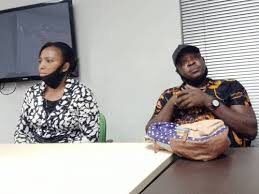 A teacher, Mrs. Ndubisi Obiechina who told the Lagos state judicial panel of enquiry on Restitution for Victims of Special Anti- Roberry Square, SARS Related Abuses and Matters that she lost two pregnancy, today has admited to the panel that popular billionaire kidnapper Chukuwudmeme Onwamadike known as Evans, is her brother.
Recall that Mrs. Ndubisi while narrating her ordeal before the Lagos State Judicial Panel on EndSARS protest, said that she was detained and tortured along with her husband, Okwuchukwu, for 22 days by SARS in 2017.
“They brutalised me in the name of interrogating me. As a pregnant woman, I did not eat or drink for one week and in the process I lost the baby.
“It was later after I left SARS that I went to the hospital that I found that the baby was gone, and I had to flush it out,” she said.
The teacher identified some of the SARS officers who allegedly tortured the couple as Phillip Rieninwa, Christian and Haruna Idowu.
She said she was pregnant again during her husband’s second arrest, adding that Okwuchukwu was released following an order of the Federal High Court in Lagos.
“Due to the emotional trauma, I lost my second pregnancy. We sued SARS at the Federal High Court and we were awarded N2 million damages for the torture and brutality.
“Since then they have not paid the money. The case was taken to the Appeal Court and it was dismissed and till now they (SARS) have not done anything,” she said.
However, on Tuesday (today) when asked by a Police lawyer from Force Intelligent Response Team, (IRT), Nosa Uhumwangho, if she was related to Evans, Obiechina said yes.
Who is Chukeudumeme Uwanmadike to you? ” He is my brother,” Obiechina said. Uhumesngho told the panel that Evans was arrested because of Mrs Obiechina. “It was through her invitation that we were able to arrest Evans.”