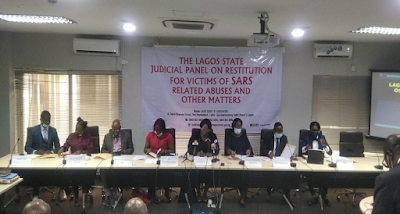 Seven alleged victims of the October 20 Lekki shootings have ‘surfaced’ at the Lagos State Judicial Panel of Enquiry and Restitution for Victims of SARS related abuses and other matters.

Their lawyer, Adeyinka Olumide-Fusika SAN, told the panel he had a petition on their behalf against the Nigerian Army.

Olumide-Fusika sought directions from Justice Doris Okuwobi (Rtd)-led a panel on how to proceed with the petitions.

The panel, which rose briefly, has just returned.

After a week’s break, the Lagos State Judicial Panel of Inquiry probing the alleged shooting of #EndSARS protesters at the Lekki tollgate on October 20 resumed sitting on Saturday.

Meanwhile, the two youth panel members, Rinu Oduala and Temitope Majekodunmi, who abstained last week in protest against the freezing of bank accounts of #EndSARS promoters by the Federal Government through the Central Bank of Nigeria (CBN) have now joined the panel.

The panel fixed Saturday for the Nigerian Army to return to give its testimony.