#EndSARS: Police shot me in the head, killed my girlfriend, I want justice, man tells panel 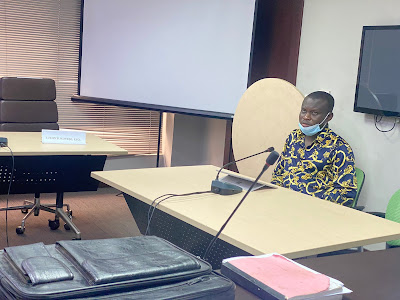 A 33-year-old man, Emmanuel Ajomafuwe, on Saturday, pleaded with the Lagos State Judicial Panel of Inquiry probing allegations of human rights abuses against the disbanded police Special Anti-Robbery Squad, to help him and his girlfriend shot dead by a policeman get justice.

Ajomafuwe told the retired Justice Doris Okuwobi-led panel that he was driving with his 20-year-old girlfriend, Ada Ifeanyi, around 7am on Saturday, April 13, 2019 in the Apapa area of Lagos when he was accosted by a team of policemen.

He said the policemen claimed that they had flagged him down but he refused to stop, to which he responded that he was not aware of being stopped as it was raining.

“I was lucky to survive the life-threatening injury to my head but my girlfriend died,” Ajomafuwe said.

While still inside his car asking why they were stopped, he was shot in the head by Inspector Dan Ojo. The Inspector also shot Adaugo in the stomach and leg.

She died in hospital. pic.twitter.com/ECQQf6pqel

The petitioner said while he was grateful to be alive, he had continued to suffer from psychological trauma from the incident. He said he could no longer sleep at night without taking sleeping pills.

“I’ve had a brain scan at Reddington Hospital, where I was admitted. I’ve done a check-up in Dubai due to my sleeping issue.

He said while six members of the police team involved in the incident were arrested at the time, Inspector Dania Ojo, who pulled the trigger on him and his girlfriend, escaped and the police had not given him any update on him.

“None of the policemen was punished. I want the judicial panel to remind the Nigeria Police to arrest and prosecute Inspector Dania Ojo and to fulfill their promise to pay my medical expenses,” Ajomafuwe stated.

Counsel for the police, Joseph Ebosereme, sought an adjournment to cross-examine the petitioner.

The panel adjourned the case till December 11.