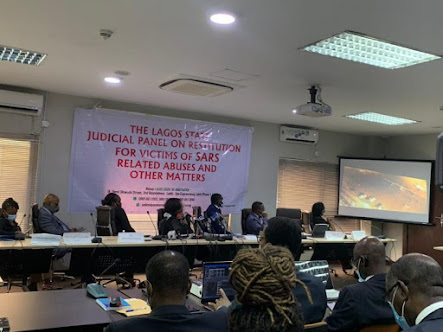 The Lagos State judicial panel on restitution for victims of SARS related matters announced on Saturday that so far they have received 210 petitions.

The panel which has 6 months to come up with recommendations after hearing all matters announced that by 22nd December, it would stop accepting any petition and focus on hearing.

This would help them meet up with their six months mandate for an efficient compensation process for victims.

They also urged people intending to petition the Nigerian Police Force or the disbanded Federal Special Anti-Robbery Squad to do so before the 22nd of December when they would stop accepting petitions.

Previously, on November 14, the panel announced that they have received over 100 petitions against the police and FSARS.

Since the inauguration of the panel by Lagos governor Babajide Sanwo-Olu in October, the panel has been hearing cases of Police abuse. The panel which will sit for six months is mandated to thoroughly investigate all verifiable claims of abuses and fatalities arising from SARS engagement in the State.

The panel at the end would bring erring officers to justice and get compensation for the victims.