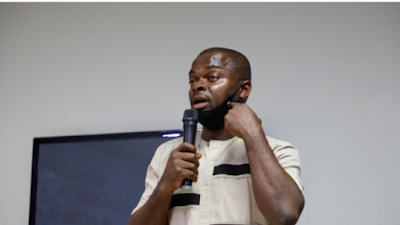 There was a mild drama during the sitting of the Lagos judicial panel on Tuesday, when Okolie Abunike, a lawyer, narrated how a police counsel slapped him four times in the process of trying to serve a court order in 2019.

He stated this during cross-examination by Emmanuel Eze, counsel to the police, while appearing before the Lagos judicial panel on restitution for victims of SARS and related abuses.

Abunike had appeared before the panel on October 27, during which he alleged that he was locked up for over one month by officers of the special anti-robbery squad (SARS) — now defunct — in 2012.

However, while appearing before the panel on Tuesday, he alleged that his wife and mother were beaten up for resisting when the officers wanted to take documents of some of his properties.

After his cross-examination by the police counsel, he asked the panel chairperson for permission to make another claim.

“I’m surprised that Mr Eboseremen would appear in a case before this panel and would claim the police didn’t beat up my wife and mum when this same man slapped me four times,” Abunike said.

According to him, Joseph Eboseremen, a counsel to the police, assaulted him at the state criminal investigation and intelligence department (SCIID), Panti, Yaba in 2019.

He explained that he had gone to the SCIID to deliver a notice of appeal concerning a client, and was assaulted by Eboseremen.

“The police killed someone at Ikorodu and the deceased’s brother, Ibrahim Kabiru, approached my principal, Olukoya Ogungbeje, to file a case of fundamental human rights action before the high court,” Abunike said.

“The court awarded a judgement of N200 million against the police for the deceased in a judgement delivered by Justice M.B. Idris, now a judge in the court of appeal.

“I went to Panti in Yaba where the state SCIID is located in a bid to tender the ‘order of court absolute’ to the process receiver of the legal admin of CID.”

Abunike said it was at the point of tendering the court order enforced by C.J. Aneke, a justice, that Eboseremen, the lead police counsel, accosted him and said he had appealed the judgement.

“I told him we have a registrar and there’s a formal process for serving such notice of appeal and that I cannot take it, because I cannot issue receipt and then, Eboseremen slapped me up to four times in a row for turning down his request to take the appeal notice,” he added.

In response, Eboseremen did not admit to whether he slapped Abunike or not.

Eboseremen, instead, alleged that Abunike tried to tarnish his image because he refused a 10 percent offer out of the N200 million awarded by the court.

Doris Okuwobi, the panel chairperson, adjourned the hearing of the case till December 4, 2020.