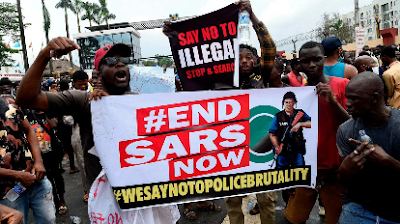 The National Inter-Faith and Religious Organization for Peace, NIPROF, has cautioned Nigerian youths against allowing politicians to use them as agents of destruction.

NIPROF said youths should not allow groups working against the interest of Nigeria use them.

The group’s National Coordinator, Bishop Sunday Garuba stated this while addressing journalists, following the destruction of private and public properties that accompanied the End SARS protests in Nigeria.

Garuba also criticized Nigerian youths for allowing those he termed “evil forces” hijack the laudable protests that led to destruction and looting in the country.

He, however, noted that the destruction would have been more severe but for divine intervention.

According to Garuba: “The EndSARS protest was one of such avenues where they would have driven home their point for reforms in the Nigerian Police Force, but they allowed some undesirable elements that do not mean well for the country to hijack the protest.

Some Nigerian youths had taken to the streets to protest police brutality and bad governance in Nigeria.

The protesters under the End SARS banner took over major streets in the country.

However, hoodlums later hijacked the protest and took advantage to cause havoc in the country.