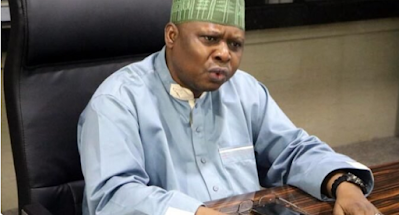 Titus Okunrinboye, a witness of the Economic and Financial Crimes Commission (EFCC) in the ongoing trial of Taminu Turaki, former minister of special duties and inter-governmental affairs, admitted embezzling contract funds while serving in the ministry.

Currently an accountant at the office of the head of service of the federation, Okunrinboye, who was head of the central pay office at the ministry of special duties and inter-governmental affairs, disclosed this before a federal high court in Abuja on Wednesday.

Earlier on Tuesday, while under cross-examination by Joe Gadzama, Turaki’s lead counsel, Okunrinboye admitted to owning different companies — including Pinnacle Energy Limited, BoyeTom Nigeria Limited, Everton Nigeria Limited and Overwhelming Synergy Pinnacle Limited — which were used to undertake various contracts while on the payroll of the federal government.

He admitted that his action was against the ethics of the code of conduct for public officers.

The witness also said he had seven different personal bank accounts, aside from that of his companies.

Okunrinboye told the court that N359 million, which was paid to the ministry’s account for a sensitisation programme, was disbursed without proper documentation.

He also admitted to forfeiting N535 million and a house in Abuja — which he said were proceeds of his loot from the ministry — to the EFCC.

When asked by Gadzama if he is being prosecuted over his alleged criminal offences, Okunrinboye said “no”, adding that the investigation by the anti-graft commission was ongoing.

Under further cross-examination by Abdulaziz Ibrahim and Nasir Seidu, two other defence lawyers, at the resumed trial on Wednesday, the witness admitted diverting contract funds and sharing them with Vincent Odafe, the then director of finance and administration at the ministry.

Okunrinboye admitted that one of his companies got a contract of N49 million to supply grinding and sewing machines, and the proceeds of the contract was shared with staff of his office and Odafe.

Overwhelming Synergy Pinnacle Limited, another company owned by the witness, got an N84 million contract which the witness admitted was never executed.

Like the first, the proceeds were also shared with Odafe and other staff of his office at the time.

“Your boss (Odafe) got N45 million and you got N20 million and the balance was shared among the members of staff of your office?” Ibrahim asked

Inyang Ekwo, the judge, adjourned the case till December 16, 17 and 18 for continuation.

The EFCC had arraigned Turaki on May 4, 2020, over allegations of fraud.

He was arraigned on a 16-count charge alongside Sampson Okpetu, who served as his special assistant; Samtee Essentials Limited, and Pasco Investment Limited — companies linked to Okpetu.

Turaki was the minister of special duties and inter-governmental affairs from 2013 to 2015 under former President Goodluck Jonathan.

He also served as the supervising minister of labour from 2014 to 2015.