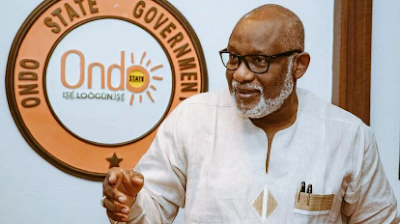 Following the death of the wife of the former Senate Leader, Senator Victor Ndoma-Egba and six others in fatal a auto crash in Ondo State, Governor Oluwarotimi Akeredolu has described the incident as shocking.

While expressing his heartfelt condolences to the family of Ndoma-Egba, over the death of his wife, Amaka, the governor prayed for the repose of the departed souls.

Wife of the former Senate Leader lost her life alongside six others in a fatal auto crash along Ore-Okitipupa road in Odigbo Local Government Area of the State while on their way to the funeral ceremony of the late mother of Olusola Oke at Igbokoda, Ilaje Local Government.

In a condolence message signed by the Commissioner for Information and Orientation, Donald Ojogo, the governor also sympathised with Oke over the sad event involving friends and well-wishers enroute the burial ceremony.

According to Akeredolu, his thoughts and prayers are with his long-standing friend Senator Ndoma-Egba, the children and indeed, family members of all the victims involved in the accident.

“This is a shared moment of sobriety and a hurt of immeasurable magnitude of our collective emotions. The Government and the good people of Ondo State are no doubt, devastated and shocked at this incident.

“Our hearts and prayers, as well as thoughts as Government and people of Ondo State, are with the Ndoma-Egba family as well as other affected families. No words, no words, indeed, can heal this deep cut; only self consolation and stronger faith in God can do”, Akeredolu said.

He prayed God to grant the former Senate Leader and all affected, the fortitude to bear the irreplaceable losses.