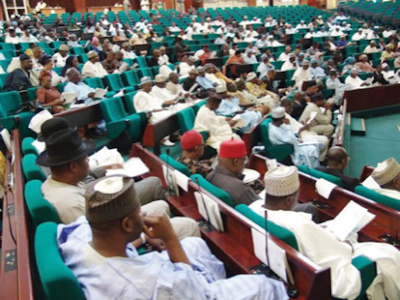 Chairman of the Committee, Hon. Rotimi Agunsoye denied that Buhari’s Aide was queried during her 2021 budget defence which he supervised.

He said there was no prior appropriation to be expended on COVID-19, hence, the Committee had no business interrogating the SDGs boss.

The lawmaker while speaking with newsmen in Abuja, asked purveyors of misrepresentation of issues that are critical to the economy should desist.

Earlier at the budget defence, a member of the Committee and member representing Badagry Federal Constituency, Hon. Humpe Akande said there was no basis for querying OSSAP-SDGs or Princess Adejoke Orelope-Adefulire over any irregularities in contract award or procurement of palliatives during the budget defence session.

The lawmaker wondered what mischief-makers stand to gain, stressing that the Committee has a record of agencies of government that participated in the COVID-19 palliatives.

He said there was a need to applaud government officials where they did well which he believed would spur others to do better.

Responding to issues on the implementation of special intervention projects, Hembe explained that funds releases were exclusively the responsibility of the Executive arm of government, hence, the Senior Special Assistant cannot be held liable in the circumstance that some projects which were captured in SDGs office were uncompleted before the financial year runs out.

“You don’t expect the SSA to execute projects when funds are not released. The Committee could not have queried her when we knew that the finance needed for the execution of the projects is not available to her.

The lawmaker revealed that most Ministries, Agencies and Departments of government were faced with challenges of releases of funds from the executive in 2020 which made it difficult to execute their projects to its fullest.

“An agency can’t spend 26 billion without appropriation by the National Assembly.

“We must set the record straight so as not to put the agency in the eyes of the public.”

Vice-Chairman of the Committee, Zainab Gimba while reacting to the report on the alleged Committee’s query, urged Nigerians to discountenance the report, saying that as far as they were concerned, the Committee was quite satisfied with the Orelope-Adefulire handling SDGs’s office.

“I could sense that someone, somewhere is probably disturbed by her outstanding performance and decided to malign her integrity by all means.

Representative Princess Mariam Onuoha representing Isiala Mbano/Okigwe Federal Constituency had during the budget defence session noted that Princess Orelope-Adefulire deserves commendation over the manner she has been handling affairs of OSSAP-SDGs. But she asked for allocation of more intervention projects in her constituency for the benefits of her people.