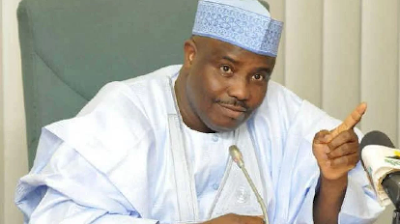 Sokoto State Governor, Aminu Tambuwal, has said that those he described as evil forces are fighting against the nation under President Muhammadu Buhari.

Tambuwal said that the President needs the support of all and sundry to overcome the evil forces in the country.

The Governor stated this on Monday when he received the Shehu of Bama who paid him a courtesy call.

According to him, “We must work together as people and as leaders and support the federal government to establish peace in troubled areas across the country.

“We will continue to support the President to overcome evil forces who are all out to destabilize our nation.”

Tambuwal expressed happiness that Bama, which used to be an epicenter of the Islamic terrorist group, Boko Haram, is gradually experiencing peace.

The Governor, however, said the monarch still has a lot of roles to play, adding, “You must support your brother, Governor Babagana Zulum and the federal government for all that they have been doing to stabilise the state and the country.”