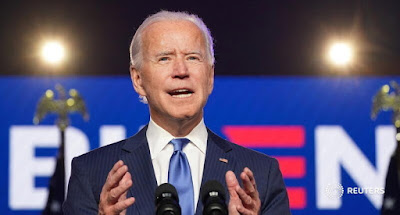 This follows his decision to name Ron Klain as his Chief of Staff.

The new appointees include his 2020 campaign manager, Jen O’Malley Dillon, being named Deputy Chief of Staff.

Campaign co-chair Cedric Richmond, a House Democrat from Louisiana, has been named senior advisor to Biden.

The 47-year-old will leave his seat in Congress to take his new role when Biden is inaugurated on January 20.

Biden also named Mike Donilon, a chief strategist for his campaign and a veteran Democratic tactician, to serve as senior advisor to the president.

Other appointments include the Chief of Staff and senior advisor to incoming First Lady Jill Biden, a counsel to the president and a director of Oval Office operations.

The appointments come as President Donald Trump continues to challenge the results of the November 3 election and refuses to concede the race to Biden.