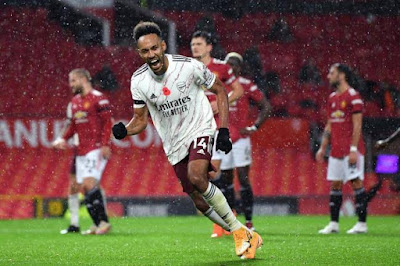 Arsenal won away at Manchester United in the Premier League for the first time in 14 years as Pierre-Emerick Aubameyang’s penalty earned a thoroughly deserved 1-0 win for the Gunners on Sunday.

United’s run without a home win in the league stretches to six games as Ole Gunnar Solskjaer’s men sink to 15th in the table.

Starved of the chance to counter-attack by the visitors’ disciplined set-up, United were far from the threat that thrashed RB Leipzig 5-0 in the Champions League in midweek.

Arsenal have struggled for goals of late, but were gifted the chance to win the game by Paul Pogba’s mis-timed lunge on Hector Bellerin and Aubameyang’s first league goal since the opening day of the season moved Mikel Arteta’s men up to eighth.

Victory also ended a run of 29 games without a win away from home for Arsenal against their ‘big six’ rivals stretching back to January 2015.

The day started in sombre fashion for United as they remembered former great Nobby Stiles, who died at 78 this week, and confirmed the news that another legend of the club Bobby Charlton is suffering from dementia.

On the field, there was precious little to lift the mood at Old Trafford as United again failed to shine on their own patch.

In his 100th game as United manager, Solskjaer stuck with the 4-4-2 system that demolished Leipzig in such stunning fashion.

However, Arsenal were not so easily opened up on the counter-attack as Arteta’s side again just lacked a cutting edge up front to turn a disciplined performance into a more convincing win.

Aubameyang had not scored a Premier League goal since signing a new three-year contract six weeks ago and prior to his penalty endured another frustrating day in front of goal as he could not stretch far enough to turn home Bellerin’s dangerous low cross at the back post early on.

Mason Greenwood fired low into the feet of Bernd Leno from Marcus Rashford’s pass in a rare sighting of United’s front two in the first half.

But Solskjaer would have been content just to get to half-time on level terms as Willian struck the bar for the visitors after a well-worked one-two with Aubameyang before Bukayo Saka headed the best chance of the half over the bar.

Arsenal continued to pose the greater threat after the break as Aubameyang curled wide the sort of half-chance he has made his speciality from the edge of the box before the outstanding Thomas Partey stung the palms of David de Gea.

Solskjaer’s change of shape has been seen as a way of getting Pogba back into the team alongside Bruno Fernandes.

But a moment of ill discipline from Pogba finally gave Arsenal the breakthrough 21 minutes from time as the Frenchman needlessly dived in to clip Bellerin inside the box.

Aubameyang kept his cool to break his scoring drought by sending De Gea the wrong way and score Arsenal’s first goal in the Premier League for 277 minutes.

The visitors then held out doggedly with the closest United coming to an equaliser when Mohamed Elneny and Leno combined to turn Donny van de Beek’s cross onto their own post.