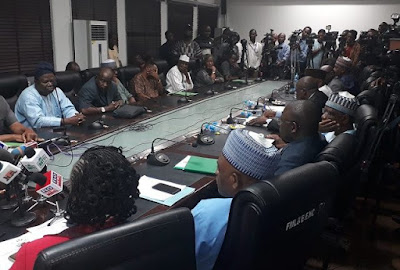 The Federal Government has assured that its face-off with the Academic Staff Union of Universities would soon end as all but one of the issues have been resolved.

While describing the strike as unnecessary, the government said there are other ways of getting things done.

The Permanent Secretary, Federal Ministry of Education, Sonny Echono, stated these in an interview with journalists in Abuja after monitoring the Professional Qualifying Examination organised by the Teachers Registration Council of Nigeria.

Echono said, “The government is working very closely. We are very concerned and the President is very concerned about this protracted (ASUU) strike which, to so many of us, is unnecessary. We believe there are other ways of getting things done.

“There’s a shared acceptance of so many of the issues and we are at a point that very quickly and soon, it will be resolved. There’s only one issue in contention, really. The other issues have either been resolved or there have been some kind of compromise that worked out.

“We believe that reason will prevail and the overall national interest will be the guiding principle in coming to a quick resolution. I can assure you that work is going on assiduously in this.

“Only two days ago, the ASUU executives were at the Ministry to meet with the Minister for certain consultations and we felt we needed to tell them exactly what our positions are.

“We will look at the overall interest of the Nigerian people. We know that we also operate in a context of government playing out different segments even in the University setting.

“We have four different unions making demands and we have to balance this. We understand the peculiarities of ASUU and we believe the members are patriotic enough to know when to call it quits and what to call a compromise.”

ASUU had on March 24, 2020 embarked on an indefinite strike over the failure of the Federal Government to fulfil the 2019 agreement; the lingering disagreement over the Integrated Personnel and Payroll Information System and other factors.

But the Minister of Labour and Employment, Dr. Chris Ngige, had on Channels Television said that if the matter was not resolved by this week, he would explore the provisions in the labour law and other channels.

He said the government had met six of the union’s nine demands and that they would meet again next week with the hope of ending the prolonged strike.

Echono stressed that the decision to put the benchmark on teaching was aimed at having only the best brains in Nigerian classrooms as teachers, adding that as from 2021, only qualified teachers would be allowed to teach in the country.

He said that a national implementation committee would be inaugurated in the coming week to ensure federal government’s agenda on teachers registration and revitalisation was achieved, especially, the entry qualification for teachers in schools.

He said, “With effect from next year, we will not admit or engage people as teachers if they don’t meet a particular threshold. We are now limiting entry to only the best.

“You must have a First Class or 2:1 as minimum and if you have qualification in other subjects that is not in education, we will arrange for a conversion programme to be administered by the National Teachers Institute, TRCN and any University that has Faculties of Education or this programme because you also have to learn ways of communicating and managing students.

“We are migrating teachers who are not qualified or do not have the requisite qualifications, competency, not licensed or registered to pseamless.out of our classrooms to make way for qualified personnel because we want to achieve learning and teaching and learning occurs in our schools.”