Any cross-dresser fighting for your throne is a fool -Self-acclaimed Nigerian Princess, James Brown tells Bobrisky 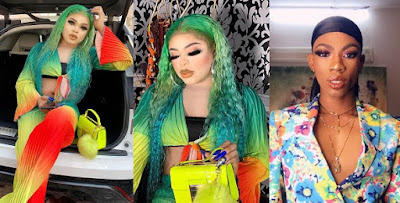 James Brown, a Nigerian cross-dresser, has assured Bobrisky, his colleague, that no one is attempting to dethrone him as the leading figure in the country’s cross-dressing community.

Bobrisky, whose real name is Idris Okuneye, had taken to his Instagram page on Monday to warn other cross-dressers to steer clear of competition with him.

The Snapchat celebrity also said that those daring to usurp him would have to “work extremely hard” as he is not yet ready to relinquish his position.

“No one sits on her throne. All dis upcoming wanna be Bobrisky be ready to work extremely hard to sit on dis throne cos ur mama ain’t leaving anytime soon. Still leading as no one in Africa,” he wrote in a mixture of Pidgin and English. 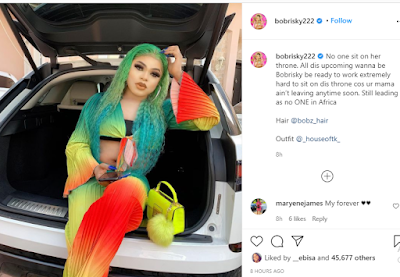 Reacting to Bobrisky’s post, Brown took to his Instagram story to dismiss any competition with the “male Barbie doll,”  whom he described as “auntie”.

Brown said only “fools” would fight Bobrisky for his spot as the leading cross-dresser in the country, adding that others seeking to grow should rather learn from him. 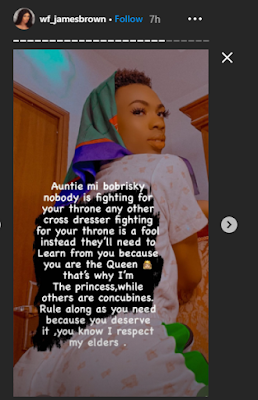 “Instead, they’ll need from you because you’re are the queen. That’s is why I’m the princess while others are concubines. Rule along as you need because you deserve it. You know l respect my elders.”

This is not the first time Bobrisky would openly aim a dig at other upcoming cross-dressers.

In January, the controversial internet celebrity had boasted that he remains the only known cross-dresser in the country, noting that her crown was not for any other person.

“Senator girlfriend…… Did I hear there is another upcoming Bobrisky ? You go hustle tire. My crown is for no one,” he had said.