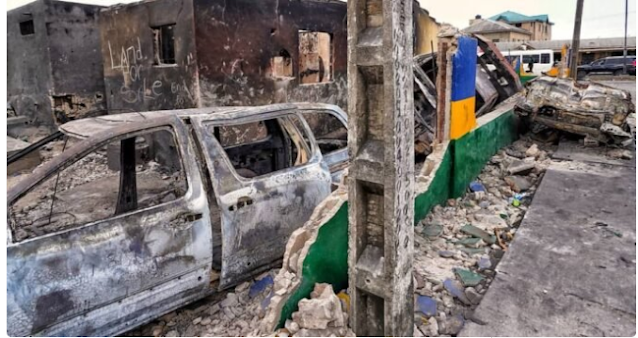 Babajide Sanwo-Olu, governor of Lagos state, says he was moved to tears during the assessment tour of assets destroyed by suspected hoodlums.

Suspected hoodlums broke loose in the state earlier in the week, targeting public and private properties for destruction.

Speaking with reporters on Friday, Sanwo-Olu said he visited 27 locations where there was wanton destruction, leaving behind ruins like a war zone.

“What we’ve seen is the highest level of wanton destruction, a destruction that is like a war zone,” he said.

“I am indeed very traumatised right now, I couldn’t even come out of my car at some point in time. I was moved to tears when I saw our oldest court in Africa possibly, but certainly the oldest in Nigeria razed down. My heart bled, I couldn’t watch any further.

“The level of destruction and the level of pain that we have is a lot. I want to use this opportunity again to appeal and appease the people that this is not the Lagos that was handed over to me on May 29, 2020.

“Since 1967, I am not sure we have witnessed anything close to this before with the level of destruction in the places we have been to today.

“Moving forward, we need to continue to heal ourselves, talk to ourselves, advice and implore some of our citizens that are still using social media to instigate, or to ask people to stand up again or to incite citizens and young men.

“At the level of what we have seen, I think anybody that is doing that, such people will have to require psychological test. It certainly won’t be under my watch, that we would lose the city with the highest population in Africa and largest economy in the whole of the black race.”

He further said the cleaning of the city will commence from Friday night by Lagos Waste Management Authority (LAWMA) officials as “ there is a whole lot of road blocks and tires burnt on the road”.