Why I prayed for widespread killings in Nigeria -Wike 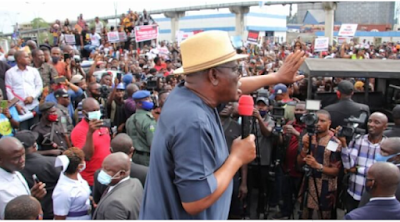 Nyesom Wike, governor of Rivers state, says he prayed for killings, kidnapping and armed robbery to spread across the country because the federal government did not take him seriously when he raised the alarm over insecurity.

Addressing #EndSARS protesters in Port Harcourt, the state capital, on Tuesday, Wike alleged that the federal government thought he was playing politics with attacks in his state.

Describing the special anti-robbery squad (SARS) as a bad unit, Wike said no other governor has spoken against the excesses of SARS like he has done.

He said he pledged support for the protesters because “SARS has killed more people in Rivers than in any other state”.

“Nigerians like people who dance to the gallery but I’m not one of those governors and I will never be,” he said.

“Mine is no longer politics. Nobody has suffered, no state has suffered in the hands of SARS like Rivers state. I’ m the only governor who has come out openly to fight against SARS and I say they must scrap this SARS.

“No governor came out, no one, no one came out that SARS should be scrapped. So, we have lost so many people because of SARS. When I was shouting in this country, I was shouting about SARS but no one state supported Rivers State. Not one state. Fine. SARS has killed our people a lot, I cried and cried, no state agreed and you want to tell me that the same SARS has gone to kill people in other states. Now, it has got to them. Now you want me? When they were killing my people, I was shouting, nobody answered, now, they have killed their own people too and they have seen how bad SARS can be.”

Wike, who had earlier banned protests in the state, made a U-turn and identified with the protesters.

The #EndSARS campaign has gained momentum across the country, with protesters blocking major highways as a measure to press home their demands.