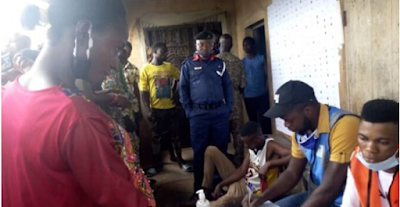 Security officials have arrested a voter in Ajagba community, Irele local government area (LGA) of Ondo state, for attempting to cast a ballot with a fake permanent voter card (PVC).

He was caught by electoral officials at the point of voting when the card reader could not recognise the PVC.

A closer look at the card showed that it was manipulated to look like a real PVC.

According to the presiding officer at ward 07, polling unit 05 where the incident took place, “the voter cloned a voter card bearing his name.”

The electoral officials, however, refused to disclose the name of the voter.

An official of the Nigeria Security and Civil Defence Corps (NSCDC) ordered the voter to sit on the floor where he was kept till after the voting exercise was concluded.

Meanwhile, at the same polling unit, one Owoeye Iyanro was nabbed for attempting to vote for the second time.

She was asked to leave the polling unit immediately.

Across the 18 LGAs of the state, voting is ongoing as residents decide on will govern Ondo for the next four years.

Of the 17 political parties participating in the exercise, three candidates are considered major contenders for state’s number one seat.