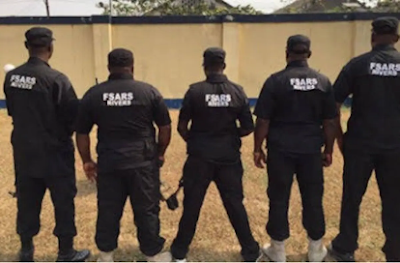 The disbanded Special Anti-Robbery Squad (SARS) appears to have returned to work in Lagos.

The excesses of the notorious unit triggered nationwide protests.

Many have died or were injured in clashes with hoodlums or offensives by security agents.

In a trending video, some armed men with guns are seen harassing citizens.

Eyewitnesses said they identified some as SARS operatives.

A voice is heard mocking residents who raised their hands and trekked in single file.

Speaking in pidgin English, he said: “You people said End SARS, why can’t you end it now.”

He later told one of the passers-by: “Put your hands up…God will punish your father.”

It was gathered that this occurred at the Garage area of Ikorodu.

The popular central mosque located in the area is visible in the footage.

The Lagos government has announced an extension of the curfew in the state by 72 hours.

Happening in ikorodu🤧. The monster are back on the street #EndSARS ✊🏾 pic.twitter.com/CsPS4rky1E