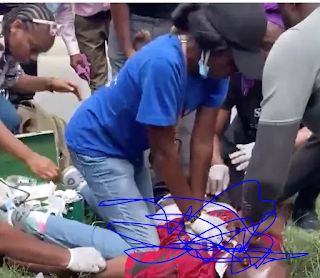 A peaceful demonstration by #EndSARS protesters in Surulere area of Lagos has ended in tragedy, with the target of the protest bearing its beastly pangs again, killing one of the unarmed protesters.

The marchers were peaceful until some armed policeman shot at one of them, killing him.

The slain man in his 20s has not been identified.

Fellow protesters and a medical team embedded in the demonstration, tried in vain to save him.

Courage Ngele, one of the protesters announced the tragedy:

“The medical team did their best to keep him alive. The young Nigerian also put up a good fight.

“Unfortunately, he couldn’t make it”, he wrote.

Another was filmed with a bullet lodged in his thigh.

It is unclear yet if Nigerian authorities gave a shoot at sight order.

The Nigerian government has been accused of trying to quell the protests.

The killing followed yet another in Ogbomosho, where police killed another youngster identified as Jimoh.

President Buhari regretted the shooting today and promised to set an enquiry.