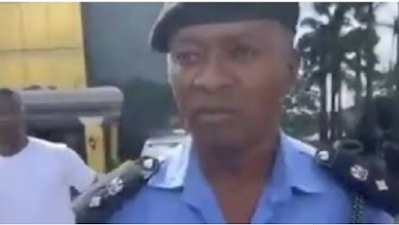 A video wherein Obioma Obi, a police officer, could be seen threatening to shoot #EndSARS protesters in Owerri, Imo state, has surfaced online on gone viral.

In the less than one-minute footage, the demonstrators could be seen engaging in a heated exchange with police officers who were stationed at a section of the city.

It was not immediately clear what caused the face-off between the two parties but the police officers could be heard telling the protesters to move back, a directive resisted by the latter.

In the ensuing drama, Obi, who is said to be a divisional police officer (DPO), was seen pulling his pistol and charging at the irate youths.

Apparently rankled by the development, the protesters could be heard daring him to shoot, while some tried to restore tranquility.

Let it be put under record that officer Obioma O. Obi of the NPF @PoliceNG assaulted and pulled a loaded weapon on peaceful protesters, Let the reform start from this video #EndSars #EndSARSBrutality #EndSarsProtests pic.twitter.com/kws9pEHCT2

The police officer’s action has continued to generate controversies on social media platforms, with many Nigerians calling him out for being “unprofessional”.

Reacting to the development on its Twitter page, the Nigeria Police Force (NPF) said it would investigate the issue and ensure that necessary action is taken.

“Your complaint is hereby acknowledged and investigation has been initiated. Your tracking number is #CRU617868, Thank you for contacting NPF-CRU,” it wrote.

Your complaint is hereby acknowledged and investigation has been initiated. Your tracking number is #CRU617868, Thank you for contacting NPF-CRU. https://t.co/tTBfnfJsEr

“Your complaints have been forwarded to the appropriate authority for necessary action. Thank you.”

The demonstration comes amid the nationwide outrage trailing the Special Anti-Robbery Squad (SARS) over alleged harassment and extrajudicial killings of youths by its operatives.