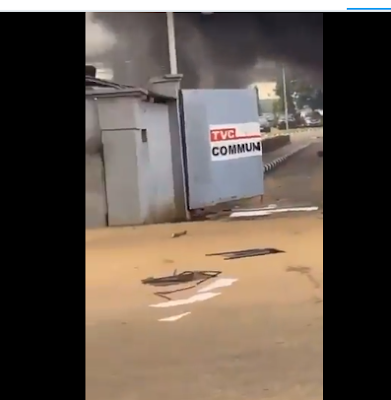 Suspected hoodlums have set fire to Television Continental, aka TVC, at Ketu, Lagos.

A popular talkshow programme, YourView, was on when the hoodlums besieged the station.

The programme host, Morayo Afolabi-Brown, who said the hoodlums entered in a van, asked to go on a commercial break.

The station had since then been stuck.

TVC is on fire is not showing now #EndSARS #EndPoliceBrutality pic.twitter.com/0UyjcW2OJq

Videos online confirmed by workers at the station said the assailants set fire to the station over its connection to a former Governor of Lagos State, Bola Tinubu.

Eyewitnesses claimed that seven people were confirmed dead and many injured.

The incident has been greeted with outrage all over the world.