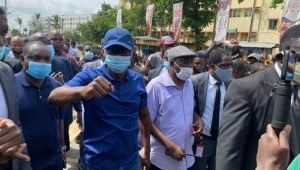 A video of ‘EndSARS’ protesters shushing Babajide Sanwo-Olu, governor of Lagos, in the protest against police brutality with ‘FEM‘, a recent hit song by Davido, has surfaced on social media.

As in other states in the country, the campaign against police brutality has continued to gain momentum in Lagos.

This is despite the disbanding of the Special Anti-Robbery Squad (SARS), which was accused of harassing citizens.

On Tuesday, Nigerians took to Alausa, Ikeja, to continue agitations as Sanwo-Olu addressed them a second time.

In his address, the governor had spoken about the issues protesters raised while revealing his efforts to tackle them.

But a video surfaced on Twitter showing that the crowd had started chorusing ‘FEM’, which has become track used to shush individuals whose commentaries are unsolicited by their addressees, while the governor was still speaking.

“O boy you don dey talk too much, small talk you don dey look who talk,” they chanted after a DJ played the song.

While commenting on his first encounter with the protesters back on Monday, Sanwo-Olu had said: “I want to appeal to the protesters to take a break from protesting tomorrow.

“Tempers are at the highest on all sides at this time. And while we work to prevent escalation, the safety of our residents is paramount. I speak not just as a governor, but as a father, brother, and son.

“The safety of everyone involved in peaceful protests across Lagos is important and, communicating with the CP, this is what we want to guarantee on all sides. Tomorrow, I will be meeting with HE Pres. @MBuhari in Abuja.

“I have received the news of casualties at the Surulere protest as well as other developments we are monitoring.”