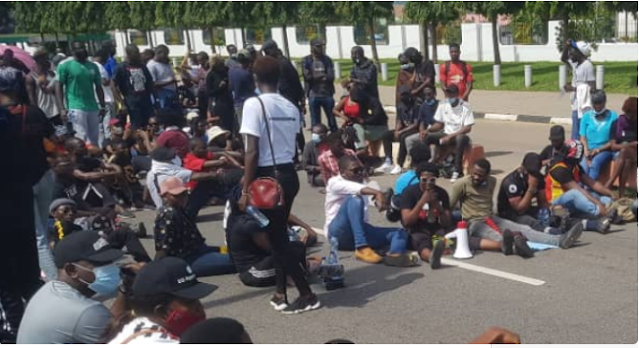 As the ongoing #EndSARS protests across the country entered Day 9, Thursday, scores of hoodlums have, attacked protesters in Ikeja, Lagos.

As early as 7am, the protesters rose from Lagos State House of Assembly to barricade Lagos/Ibadan Expressway and prevented vehicular movement on the expressway.

Here are the thugs attacking peaceful protesters at Alausa with machetes/cutlass, knives & sticks

They came in over 20 chattered buses, an evidence that they're being sponsored by politicians.#AlausaProtest #EndSWAT #EndSARS OSP James Nwafor / Adamu pic.twitter.com/mALQnc4S1O

Previously, at the #AlausaProtest there was always police presence.

Today that thugs attacked, the police conveniently were absent.

And you think people are foolish? #EndSWAT #EndSARS

However, some hoodlums surfaced from nowhere wielding dangerous weapons to intimidate the protesters. The hoodlums are alleged to have come in Lagos State owned BRT buses

MC Oluomo and Baba Alado sent thugs to Alausa. They came in Lagos State owned BRT buses and the Nigerian Police refused to stop them!!

Let's take note of the serial number of the bus (240171) that conveyed thugs to disrupt the #AlausaProtest. The owner will shalaye later.

We are more than them.

Please be safe out there... abi we should call MC Oluomo? https://t.co/oCaTdE7jXG

As at the time of this report, the protesters were scampering for safety. Details later.