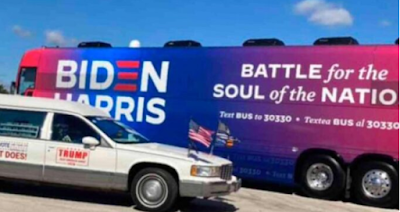 A campaign event for Joe Biden, democratic candidate in the United States presidential election, had to be cancelled over alleged threats from supporters of Donald Trump, US president.

Local democrats said they were compelled to call off the campaign event which was scheduled to take place on Friday in Pflugerville, a city in Texas, due to “security reasons”.

According to The Independent, the Biden/Harris campaign bus made a brief stop in downtown Austin when it was interrupted by a group of Trump’s supporters.

The local democrats also alleged that the same group of Trump supporters had been following the bus around the country in an attempt to disrupt events in key battleground states.

Rafael Anchía, a member of the Texas house of representatives, said some of the rebels were seen carrying weapons.

“At least, the Trump hearse is appropriate given the 200K+ Americans who have died due to his incompetence,” he added, referring to a vehicle driven by Trump’s supporters.

Also speaking on the cancellation, Sheryl Cole, a Democrat running for re-election into Austin Council, said: “Unfortunately, pro-Trump protesters have escalated well beyond safe limits. Sorry to all who looked forward to this fun event.”

With 38 slots, Texas has the second highest electoral college votes in the United States.