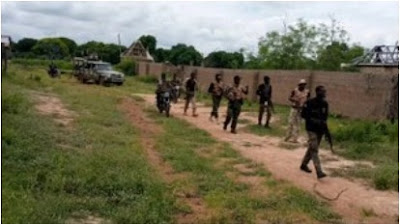 The troops of Operation Fire Ball has said that it eliminated 14 terrorists in recent encounters in the North East.

The Acting Director, Defence Media Operations, Brig.-Gen. Bernard Onyeuko, in a statement on Sunday, said that operation was a subsidiary operation launched under Operation Lafiya Dole to route out remnant of terrorists.

Onyeuko said that four terrorists’ gun trucks were destroyed as well as recovery of large cache of arms and ammunitions during the various encounters.

He disclosed that the troops had on Oct. 21 noticed unusual vehicles tailing the convoy of vehicles conveying Internally Displaced Persons from Maiduguri Cosmopolitan City to Baga town in order to infiltrate their position.

According to him, the troops inflicted heavy casualty on them by killing three terrorists and destroyed one Gun Truck.

“The troops are hereby commended for the resilience, doggedness and commitment exhibited during the above encounters. They are equally encouraged not to rest on their oars but build on the successes recorded.

“The entire populace of the North East zone are hereby assured of the determination of the High Command of the Armed Forces of Nigeria to finally rout out the remnants of the BHT/ISWAP criminals from their enclaves,” he said.