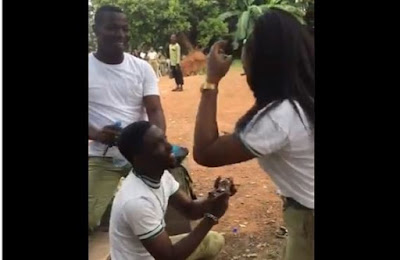 A video wherein a corps member feigned illness to propose to his girlfriend has surfaced online and gone viral.

The less than three-minute footage started with the young man — simply identified as Baloking — having a conversation with Akorede Adejoke, his girlfriend, who is also a corps member.

The lovebirds, clad in their National Youth Service Corps (NYSC) uniforms, were in the company of their colleagues who were gathered in groups after their passing out parade (POP) ceremony.

But while the conversation was ongoing, Baloking suddenly grabbed his stomach, feigning to be writhing in pains.

He then went on his knees, resting on an object, and appeared to be fainting.

Unaware that it was a prank, the development left his girlfriend unsettled as she is seen calling on others to help with water and medical assistance.

Amid the ensuing drama, Baloking wrapped his hands around her and then proposed to her.

His action came as a shock to Adejoke, who would eventually accept the proposal amid cheers from friends.

In a post on her Twitter page, Adejoke, an entrepreneur, reaffirmed her love for Baloking, adding that she never envisaged such a prank from him.

“To the man of my dreams @Baloking_Hub I said YES… I love you yesterday, today, tomorrow, forever and 200 days!..Thanks for loving me unconditionally…and this prank got me,” she wrote.

To the man of my dreams @Baloking_Hub 😫I said YES😭... I love you yesterday,Today,Tomorrow,Forever and 200 days 😁!..Thanks for loving me unconditionally 😫...And this prank got me😭😭..... #MercyMercyMovie #MadeinLagos #ChampionsLeague @instablog9ja @TundeEddnut pic.twitter.com/WGbEW4jXTW