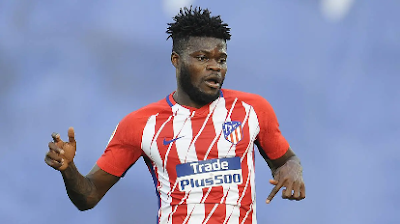 Arsenal have informed LaLiga and Atletico Madrid, that they are ready to pay Thomas Partey’s £45 million release clause, according to AS.

Partey was one of the two midfielders Mikel Arteta was looking at to bolster his squad this summer.

After their efforts to lure Houssem Aouar from Lyon failed over the weekend, the Gunners have moved quickly to bring in Partey.

It is understood the 27-year-old Ghana international is very keen on the transfer.

Arsenal are hoping to free up wages and space in the squad by releasing players.

Lucas Torreira is in Madrid completing a loan move to Atletico, while Matteo Guendouzi is close to joining Hertha Berlin also on loan.