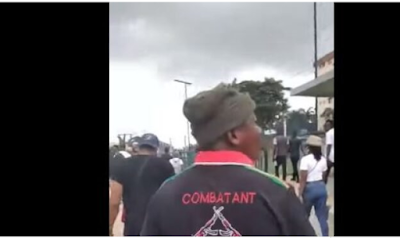 A video wherein a man, believed to be a mobile police officer, could be seen participating in the ongoing #EndSARS protest in Lagos, has surfaced online and gone viral.

In the short footage, the man, clad in a vest belonging to the Nigeria Police Force (NPF), is seen venting his anger against operatives of the Special Anti-Robbery Squad (SARS).

He said his brother was arrested by SARS officials and was only released after he paid an undisclosed amount of money.

“They arrested my brother…me we I be officer, do you know how much I paid? God punish them,” he could be heard venting in pidgin English.

There have been increased protests against the police unit over the alleged harassment and extrajudicial killings of Nigerians by its operatives, with many calling for its proscription.

The renewed protests against SARS started last Saturday after a video showing a man allegedly gunned down in Delta by its officials went viral.

Amid the protests, Frank Mba, spokesman of the police, had said SARS cannot be scrapped because of the ongoing fight against crimes in the country.

“What we need to do is to reform SARS and make them responsive, responsible and make them to work in accordance with laid down procedures,” he had said.