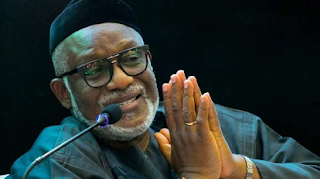 Governor Oluwarotimi Akeredolu of Ondo State, on Friday, urged Police authorities to take up their responsibilities as an institution towards effective policing of the society.

While appealing on the need for the police to take charge of the public space for the good of all, Akeredolu expressed concern over what he described as the low level of policing in Ondo State.

Aftermath of the End SARS saga, which turned violent with policemen being among the casualties, there had been concerns across various quarters over the continued absence of policemen on the streets.

According to the governor in a statement by his Commissioner for Information and Orientation, Donald Ojogo, “The general observation across the state shows a very low level of policing which is risky to society. Of note, policing is key and can only thrive on a note of mutual trust and respect.”

He added that “We can all, only strive for a better society and brace up to take maximum advantage of lessons learnt from the unfortunate incidents of the last two weeks.

“Saddening as the events appear, there is no doubt that a fresh orientation, perception of self appraisal as well as an encouraging mood of sober reflection pervades the nation.”