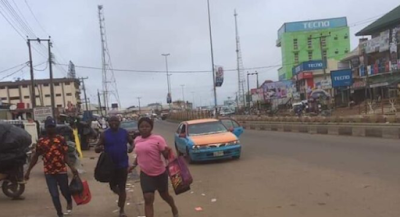 Tension heightened in Akure, the Ondo State capital on Sunday morning when thugs suspected to be from the camp the of All Progressive Congress, APC and the Peoples Democratic Party, PDP attacked each other.

During the fracas, sporadic shootings rented the air as motorists and passers-by scampered for safety.

With the busy Oba Adesida road deserted which also extended to Arakale axis of the city, those who were on their way to church were forced to turn back in order not to be caught in the web of the violent attack.

The thugs armed with dangerous weapons were said to be about 70 in number.

Two persons were allegedly shot during the attack.

It was gathered that the early morning crisis was a reprisal attack by suspected APC thugs following an attack on their members at Ijomu/Oba-Nla junctions of the state capital by PDP thugs on Saturday night.

According to a source, policemen who were drafted from A-Division Police Station which was few meters from the scene of the crisis could not stop the thugs who were said to be armed with guns, machetes and other dangerous weapons.

The governorship election in the state will hold six days from now.