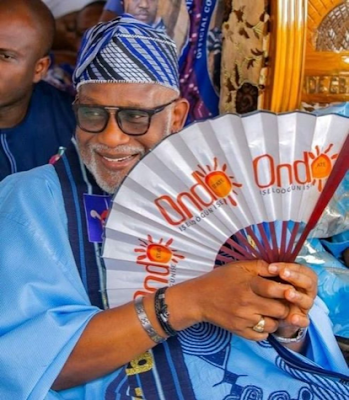 The leadership and members of the APC in the South West have congratulated Rotimi Akeredolu, members of APC in Ondo State and the entire people of the State for the victory recorded during Saturday’s October 10, 2020, Gubernatorial elections.

The people of Ondo State have spoken clearly and loudly in a peaceful, credible and transparent election.

According to a statement signed by the South West APC Zonal Publicity Secretary, Rt. Hon. Karounwi Oladapo, the Party said “the new and fresh mandate given to APC in Ondo State is an endorsement of the APC and Akeredolu’s performance in the last four years.

”It is also a challenge for improved performance during his second term. The Party, and indeed, Akeredolu, will neither disappoint nor betray the trust and confidence of the people of Ondo State.

“APC will not cede an inch of its political base and territory in the South West to the opposition PDP or any other political party. Rather, it will continue to consolidate on its gains in the five APC controlled States in the zone. The Party will also reclaim Oyo State, which it lost by default in 2019 come 2023 by God’s Grace!”

“The Party also commends INEC and the security agencies for their professional conduct before, during and after the election in Ondo State”