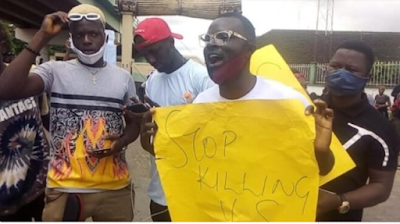 Adekunle Ayobami was a second-year student of the Federal Polytechnic, Offa, Kwara state, when operatives of the Special Anti-Robbery squad harassed him and collected his school fees in 2017. The victim said all attempts to convince the officers that he was not involved in any form of crime failed as they had their eyes on robbing him of his tuition fee.

He said he had been stopped, harassed, beaten and exploited financially several times by SARS operatives in the country. Ayobami, who said he had to pay as high as N150,000 to SARS operatives on one occasion, questioned why in a country like Nigeria where youths are not empowered by the government, members of the police force treat people like slaves.

“In this country, there is something called injustice like we have laws but we don’t follow the rules. Like being a citizen in the first place, there are some benefits that you will be entitled to. There is no empowerment for youths yet we are still trying to survive but we are still being treated like slaves which is not supposed to be,” Ayobami said.

He said anytime SARS operatives pick people up, the amount they pay depends on how they are profiled.

Ayobami was one of the individuals who shared their personal experiences during the #EndSARS protest in Ibadan on Friday.

On Wednesday, youths in Ibadan commenced a three-day protest to demand an immediate end to police brutality. The protest reached its climax on Friday when thousands of youths hit the streets of the capital city. The protesters moved from Eleyele area to the police headquarters and other strategic locations before converging on the state secretariat.

A digital entrepreneur simply identified as Lerry narrated his encounter with SARS. He said unlike many others, he never paid his way through but added that he did not need to wait for such a time to come before joining the #EndSARS campaign.

“We are here for just one thing, a peaceful protest. As a digital entrepreneur, SARS has harassed me on the way but the only thing is that not everyone has been as lucky as I am. When they harass me, I fight for my rights but some other people they harass, they extort, ambush and collect money from them,” Duke of Ibadan, as he is widely known, said.

Another protester, Olawale Akorede, said he had been harassed by SARS operatives on multiple occasions, saying he also had to pay before being released on about four different occasions.

“I have had multiple experiences with SARS. During trips to my hometown in Akure, Ondo state, I have been stopped by SARS operatives who frisk me but find nothing incriminating,” he said.

While narrating her experience with SARS, Oluwakemi, a shoemaker, said nobody is safe in the country anymore.

“I had a personal experience with them earlier this year. I was on bike with one of the persons that work for me. They just came from nowhere. Inside the traffic; anything could have happened, any car could have hit us. And they were showing us gun, for what? They said, ‘let me see your phone.’ Ok, this is my phone but there’s nothing incriminating on my phone,” she said.

“Even if you want to arrest a person, you ought to go through the normal procedure. Not because I look good, not because I dress well, not because I am using a good phone, I mean why should you harass me on the road? Why? It’s uncalled for. They go to people’s house to arrest them. We are not safe in our house; we are not safe on the streets. If we should stay at home and say we are not going to do anything about it, then they will not do anything about it too.

Okunola Babajide, a physically-challenged man, said he had no choice but to join the protest because he has first-hand experience of SARS brutality, whom he described as worse than armed robbers.

“Last two months while on our way to Palms mall, SARS operatives stopped my friends and I at Challenge. They checked our car, our phones and didn’t find anything incriminating but at the end of the day we had to pay N10,000 because they threatened that they will take us to Iyaganku (police headquarters) and frame us with robbery… they asked for N50,000 but we negotiated N10,000,” he said.

“They are not doing their job. It is not in their job to move around. If you watch American movies, they have SWAT but you don’t see them on the road in America. It is only when there is armed robbery that they involve themselves but here they don’t do what they are created to do. I fear SARS more than the armed robbers they were created to attack.”

This report was funded by the Gatefield Impact Initiative.