REPORTER’S DIARY: How I escaped being shot by an angry soldier during #EndSARS protest 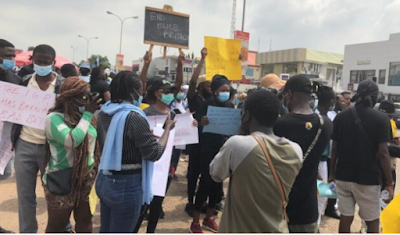 It was Horace Greeley that said, “journalism will kill you, but it will keep you alive while you’re at it.”

That quote resonated with me while I was covering the #EndSARS protest in Abuja. I was standing face to face with a soldier who pointed a loaded gun at me. The security operative, I would later learn from people around, may have been provoked because I was recording him.

There have been nationwide protests over the excesses of the disbanded special anti-robbery squad (SARS).

On Wednesday, as Abuja residents planned to continue with the protest, I was asked to cover their activities. At exactly 11:05 am, protesters in the nation’s capital began to march along major roads, beginning from Banex junction through Wuse 2 up to the road leading to the National Assembly Complex. As they hit the streets, sounds of Fela’s Ye ye dey smell, Davido’s Fem and Eedris Abdulkareem’s Jaga Jaga, blared through loudspeakers. The atmosphere was charged.

As we approached the National Assembly, I raised my device high as I continued to broadcast the scenes via Facebook. Things were fine until we suddenly heard tyres screeching from behind. Ladies and gentlemen, announcing the arrival of soldiers whose insignia showed they were from the presidential guard brigade. With the manner the gun-wielding soldiers stormed the protest venue, a passer-by would think Abubakar Shekau, the dreaded Boko Haram leader, was in our midst.

As expected, some protesters ran for their lives while the bold ones stood their ground with a simple message: “We want an end to police brutality.”

Some of the soldiers at the scene of the protest“We are not fighting you, we are just against police brutality and you should be by our side,” said a protester who, like most others, had covered their faces with masks and clothes in anticipation of teargas.

But the soldiers were not having any of that. One of them threatened to run the van into the protesters, some of who had sat on the floor.

“We no dey go anywhere. End police brutality and stop killing the youth,” a girl said as she raised a placard which read: “Our only crime is becoming Nigerians.”

The soldiers insisted that protesters must withdraw and that advancing to the National Assembly Complex gate was not an option. Some who dared them were harassed and threatened. On at least three occasions, the soldiers attacked on the entire protesters, beating anyone who refused to leave the scene.

At some point, one of those chanting “we no go gree” was kicked at by one of the soldiers who rushed at him (as seen from 53:14 in this broadcast). Apparently to calm the soldiers, the protesters started singing the national anthem but that did not achieve the desired result as a soldier pounced on two protesters who condemned the brutalisation of a member of the group (as seen here from 57:26).

About one hour after arriving at the road to the National Assembly gate, the tension had died down as the group attempted to “re-strategise”. 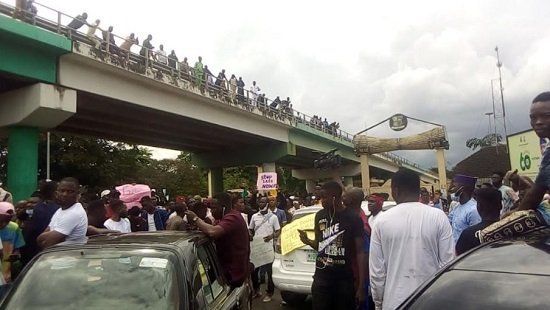 “We need to move back and go to the Unity Fountain where we will re-strategise and know our next step tomorrow,” said Aisha Yesufu, a popular activist who continued to urge the protesters to not to “lose your temper because that is what they want.”

It was at that point that I incurred the wrath of a soldier who I noticed had been eyeing me for some time. My phone had just flashed by his face when he raised his gun, warning that he will “deal with me” if I don’t stop capturing him in my video. Seeing his gun, it probably took me a millisecond to put away the phone while I was too scared to even run.

Still shocked, I managed to mutter, “officer no vex,” before stepping away, moving as far as possible from him while a thousand and one thoughts raged through my mind: “What if he had pulled the trigger and, God forbid, the bullet went through?” “What could make a security agent easily provoked to the extent of contemplating killing a harmless individual?”

A SIMILAR EXPEREINCE INSIDE A POLICE STATION

While such experience is not entirely new to me – I had once been beaten inside a police station by officers who threatened to kill and bury me, you would agree with me there are some experiences that, no matter how accustomed you have become to them, you would be taken aback whenever you go through it.

About 30 minutes after, I joined the protesters as they marched to Maitama junction where they camped till around 7pm. Of course, I also joined them in eating the jollof rice served though the thoughts of the angry soldier flashed through my mind as I savoured the delicacy.