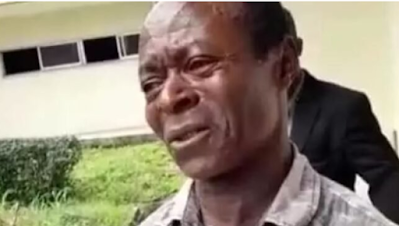 Reno Omokri, a former aide to ex-President Goodluck Jonathan, has asked his followers on social media platforms to raise funds for Dominic Onyeukwu (pictured), a man whose son was killed by operatives of the federal special anti-robbery squad (FSARS).

In a video he posted on Twitter on Monday, Omokri could be seen speaking to Onyeukwu and offering his assistance and a word of prayer over the telephone.

Dominic Onyeukwu, The Father Of The Man Whose Death Ignited The #SARSMUSTEND Protests, Speaks To Me in Tears-Part 2 (Watch Part 1 in my previous tweet)#EndPoliceBrutalityinNigeria pic.twitter.com/OsJw8Z4W2H

Onyeukwu said he would be happy if the followers of the ex-president’s aide raise funds for him because he is planning to file proceedings in court against the police.

“This week, we are taking the case to court. I would be happy, I need money now,” he said.

Onyeukwu’s son was killed by SARS operatives in Delta state and this, among other recent reports of harassment, rekindled the #EndSARS protest.

A video of Onyeukwu where he was mourning the death of his son has since gone viral.

Mohammed Adamu, inspector-general of police (IGP), announced the dissolution of SARS on Sunday after days of protests.