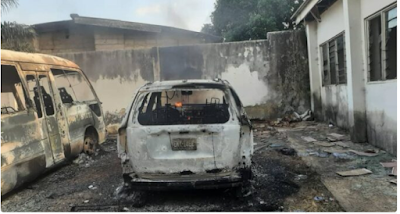 The secretariats of the Peoples Democratic Party (PDP) and the All Progressives Congress (APC) have been burnt down in Akure, capital of Ondo.

The house of Ade Adetimehin, the chairman of APC in the state, was also attacked in a separate incident on Wednesday.

Although a witness revealed that the APC secretariat was burnt down during the #EndSARS protest in the state capital, the party in a statement said PDP hid behind the protest to set its secretariat ablaze.

The statement, which was signed by Alex Kalejaye, the APC publicity secretary in the state, said the party chairman escaped from being lynched after the intervention of policemen from Elerinla police station.

“Thugs, apparently sponsored by the PDP, today launched attack on the resident of the state chairman of the APC, Engr. Ade Adetimehin,” the statement read.

“For the inability to wreck sufficient havoc on the chairman’s house, the thugs, chanting “power to the people” headed straight to the party state secretariat, and set it ablaze. The Ondo APC is stunned that a legitimate protest by youths could be employed to achieve political vendetta by setting the party’s secretariat on fire. The whole act of wickedness was premeditated; never by accident.

“The APC has it on good authority that the PDP has also perfected plans to target leaders of the APC that are either of Akure origin, or based in the capital city for attacks in the next couple of days.”

The party warned the PDP that its members had the capacity to contain aggression, while also calling on security agencies to wade in.

While exonerating PDP members from the attack, public relation officer of the party in the state, Kennedy Peretei, confirmed that the PDP secretariat was also set ablaze.

He said: “The PDP state secretariat has been razed down. One of the policemen on duty escaped by whiskers but his vehicle was burnt down as well as the Coaster bus. This is very unfortunate and a grave danger to our democracy.

“It is very uncharitable for the leadership of APC to accuse the PDP for the activities of thugs who set the APC secretariat on fire in Akure.

“How on earth can anyone attribute such dastardly acts to PDP, a party that presided over the affairs of Nigeria for 16 unbroken years. Nobody should draw the PDP into how the APC has steadily led us to where we are now as a nation.”