#OndoDecides2020: I’m disappointed at security officers at the poll – Jegede 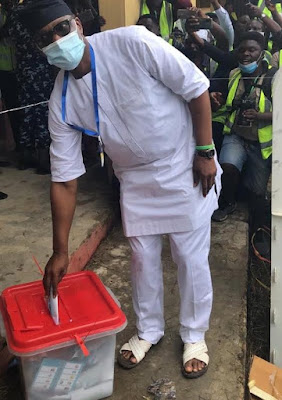 The candidate of Peoples Democratic Party, Eyitayo Jegede has expressed disappointment in some security officials deployed to monitor the ongoing Ondo governorship election.

The Governor stated this while addressing journalists after casting his vote in Akure today.

This is coming after polling officers found it difficult to authenticate the voter’s card of Jegede and his wife after they stayed on the queue for about three hours at his Ward 1, Sacred Heart polling unit 9 in Gbokan/Isikan Akure South LGA.

The governor later casted his votes and commended the voters for properly conducting themselves at the poll.

However, the governor accused some security officers at the polling unit of allowing some people to check where people are voting to.

“I’m a little bit disappointed at some of the officers here. I’m disappointed because you have an officer standing directly behind the person casting his vote and you have them giving allowances to the person who should not be there giving signals to some people in their presence until I protested.

“I have had good reports about INEC and I saw good reports in Edo and I have had a lot of reports and good things happening until it came to my turn to vote and the machine suddenly malfunctioned.

“I had to be delayed and I insisted I will stay until the card functions. My wife’s card did not pass through too and we tested others who were behind me, their cards did not pass too, so all of us waited there.

“After the protest, exactly ten minutes thereafter the card started functioning again. I have voted and I’m hopeful that everything wil work out well,” he added.