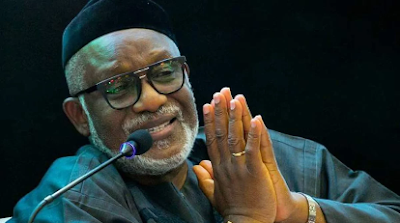 Less than 24 hours after his emergence as winner of the governorship election held on Saturday, Governor Oluwarotimi Akeredolu of Ondo State has expressed shock over the number of votes he received in three of the 18 local government areas of the State.

According to Akeredolu, who described the election results of Akure South, Akure North and Ifedore local governments where he lost as a shock, he had thought that he would win across the 18 council areas of the State.

The governor disclosed this during an interview on Channels Television.

Akeredolu maintained that he worked in the three local governments situated in the Central Senatorial district where the PDP candidate, Jegede hails from.

“I’m shocked at what happened in Akure because I take Akure South, Akure North and Ifedore as one Akure. So, I’m shocked at the development there.

“But I’ll put that behind me. I’ll move forward. I thought I would win in Akure because I worked in those three local governments where people turned against us. But it’s alright by me. We’ll forget it,” he said.

Akeredolu won 15 of the 18 local government areas of the State during the poll.