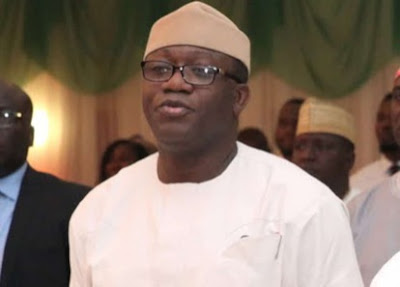 With less than 24 hours to the governorship election in Ondo State, the Zenith Labour Party, ZLP, on Friday cried out over alleged plans by Governor Kayode Fayemi of Ekiti State to interfere in the electoral process slated for tomorrow.

According to the ZLP, Fayemi is set to compromise the integrity of the election following the importation of thugs into the state from Ekiti State.

The party in a statement issued by its Publicity Secretary, Felix Olatunde also alleged that the Ekiti State Governor has been inducing security agents as part of plans to undermine the electoral process on Saturday.

Olatunde who in a statement disclosed that the thugs were being kept at a popular hotel in Akure, however, urged Fayemi to rescind his plans, stressing that residents of the state will resist any attempt to subjugate the will of the people.

“The attention of Zenith Labour Party (ZLP) has been drawn to the plan by Ekiti State Governor, Dr Kayode Fayemi to interfere in the governorship election of Ondo State towards compromising the integrity of the electoral process.

“Information available to us showed that Fayemi has imported thugs to a popular hotel in Ijapo area of Akure, the Ondo State capital. The thugs are to unleash terror on the people during Saturday’s governorship election.

“We learnt that Governor Fayemi has been distributing money to security agencies and thugs imported from Ekiti to compromise the election in favour of the All Progressives Congress (APC) and its candidate, Mr Oluwarotimi Akeredolu SAN.”

The statement further read that “It must be noted that the people of Ondo State are capable of handling their affairs without the intervention of interlopers including Fayemi; who prides himself as supervisory Governor of Ondo State.

“We hereby give Fayemi two hours within which to vacate his Ijapo hotel where he is currently hibernating as the people may be forced to invade the hotel. The consequences may not be in the interest of both neighbouring states of Ondo and Ekiti.

“Governor Fayemi who is also the Chairman of Nigeria Governors Forum (NGF) must know that the careless way he handled the influx of weapons led to the upsurge of kidnapping and violent crimes in that State. We cannot afford post-election violent crimes in Ondo State.”