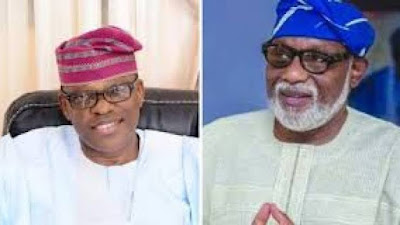 The candidate of Peoples Democratic Party (PDP) in Saturday’s Ondo state governorship election, Eyitayo Jegede, has said he would love to be in Governor Rotimi Akeredolu’s shoes.

Jegede stated this on Wednesday, during a governorship debate organised by Channels TV.

He was countering statements made by Akeredolu that he (Jegede) was part of the administration that owed pensioners, civil servants and generally performed below expectations.

“The government he (Jegede) served in owed arrears of pensions; we paid.

“Morale was low in the civil service and the civil servants were dying, being owed seven months salaries; we paid,” Akeredolu said.

“This is because I do not know the basis of comparison between a commissioner (himself) and a governor (Akeredolu).

“I would love Mr. Governor to point out specifically what he has done.”