Nigerian policewoman selected for UN officer of the year award 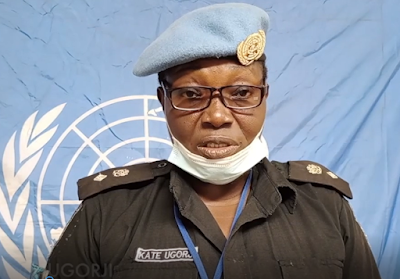 Catherine Ugorji, a Nigerian, has been selected for the United Nations (UN) woman police officer of the year award.

Ugorji, who serves under the UN multidimensional integrated stabilisation mission in Mali, was recognised for her exemplary leadership in reducing crimes in the country.

Her leadership roles in tactical operations and best practices in policing to maintain peace in the region was commended by officials of the UN.

“Congratulations to Chief Superintendent Catherine Ugorji, of the Nigerian police, serving with @UN_MINUSMA who has been selected by the @UN as one of two runners-up for the prestigious UN Woman Police Officer of the Year award for 2020,” the UN in Nigeria wrote in a post on Twitter.

“The UN Police Advisor @LuisCarrilhoPC described Ugorji’s leadership of three Formed Police Units in Gao as remarkable. Her tactical operations have been instrumental in reducing crime in the area, in support of the Malian security forces and the host population.”

Congratulations to Chief Superintendent Catherine Ugorji, of the Nigerian🇳🇬 police, serving with @UN_MINUSMA who has been selected by the @UN as one of two runners-up for the prestigious UN Woman Police Officer of the Year award for 2020. @UNPOL @UNPeacekeeping #UNSCR1325 pic.twitter.com/QnGFysrnhK

A crisis had erupted in Mali after a court nullified the results of 31 seats in the country’s April parliamentary elections; the court had also awarded victory to other contenders for the position.

A resistance group, M5, claimed the decision of the court was influenced by Ibrahim Boubacar Keita, former president of Mali.

Eventually, there was a coup in August 2020, leading to Keita’s resignation hours after he was arrested alongside other high-ranking officials.

The coup leaders, identified as the National Committee for the Salvation of the People, later declared their intention to form a civilian transitional government.