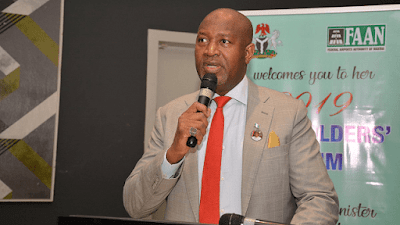 Nigeria’s Minister of Aviation, Senator Hadi Sirika, has said the Federal Government has unveiled its roadmap for the aviation sector in 2021 with the plan for National Carrier serving as its priority.

This is as the Senate Committee on Aviation frowned at the state of disrepair, of Ilorin, Minna and Makurdi airports.

While he was unveiling the Aviation roadmap to the Senate Committee on Aviation during 2021 budget defence session on Tuesday at the National Assembly, the Minister of Aviation , Hadi Sirika said the roadmap would be implemented through Public Private Partnership (PPP) in the acquisition of National Carrier.

His words, “In 2021, the sum of N78.960 billion is being proposed for capital expenditure at the headquarters in the Aviation Ministry and the emphasis will focus on the implementation of the aviation roadmap by Mr. President.

“The roadmap would be implemented through Public Private Partnership, topmost of which will be the establishment of National Carrier.”

Other projects to be executed as spelt out in the road map according to him, are establishment of Maintenance, Repair and Overhaul (MRC) facility, development of Agro – Allied Cargo Infrastructure, establishment of Aviation Leasing Company, Search and Rescue Unit and Establishment of Aerospace University with the support of International Civil Aviation Organization (ICAO).

On the National Carrier, the Minister stressed that all required agreements and arrangements with other partners, have been worked out, making 2021 as the year, the plan that has been in the pipeline, will get practical actualization.

“This government right from inception in 2015, has been planning and strategizing on how to resuscitate National Carrier for Nigeria as far as global air transportation is concerned; the plan going by what is on the ground now, will be actualised next year through the PPP arrangement.

The Minister added that aviation is the fastest growing sector of the Nigerian economy despite the setback suffered from the COVID -19 pandemic.

Indications to this effect, he said are that 10 new airports are coming up in the country in states like Benue, Ekiti, Nasarawa, Yobe and others, apart from other ones taken over by the Federal Government like Gombe, Kebbi, Dutse, Zuru airports.

He, however, said that safety and security are more of important issues to them in the aviation sector than establishment of new airports.

“Safety and security issues first before any other thing in the aviation sector, the reason efforts are being made to put some of the airports with issues of failing infrastructure in good shape.

In the light of this, airports such as Minna, Ilorin, Makurdi, complained of, are being attended to.

The Chairman of the Committee, Senator Smart Adeyemi requested the Minister to ensure the upgrade of the Ajaokuta Airstrip and establishment of Lokoja Airport.