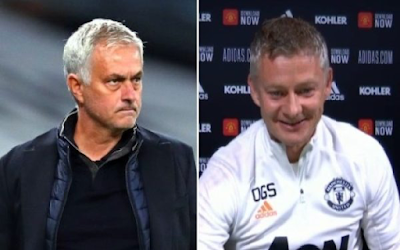 Ole Gunnar Solskjaer said the barbs going back and forth between him and Jose Mourinho ahead of Sunday’s game have just been a little bit of fun.

Solskjaer started the exchange after United’s Premier League win against Brighton where the hosts hit the woodwork five times, joking about Mourinho’s measurement of the goal frame in Tottenham’s Europa League win at Shkendija, where the crossbar was five centimetres lower than it was supposed to be.

Solskjaer said: “You have to be happy Jose isn’t here to measure the goalposts, it might have been a smaller goal!”

Mourinho responded in kind the next day when he suggested his former club are over reliant on penalties.

“I think for him the dimension of the goalposts are not important,” Mourinho said.

“For him what is important is the dimensions of the 18-yard box. He’d never accept to play with a 17-yard box, I think he would prefer a 22-yard box.”

Solskjaer put an end to the back and forth jibes ahead of welcoming Spurs to Old Trafford on Sunday, calling it entertainment.

“We are in strange times at the moment and sometimes you’ve got to have a bit of fun as well. It was just a couple of innocent comments,” the United boss said.

“For me, Jose is a very charismatic coach and manager and you’ve enjoyed in the media talking to him, I’ve enjoyed watching him and he’s a winner – but I’m not one of these that really goes into all these ‘mind games’, I’ve got ultimate respect for him as a coach and his results and everything that he has given football.

“I think it’s important that we have a bit of entertainment as well and Jose always throughout the years has given us some fantastic moments in football, both in his press conferences and on the pitch but as a striker I didn’t mind how big the box was when I got in there. It was just a strike on goal.”

Harry Maguire is likely to return for Sunday’s game having recovered from a knock which saw him miss the win against Brighton on Wednesday night, and Solskjaer is hoping for an improved performance from his side.

“Well a result will always be a consequence of the performance you put in,” he said. “The more we improve our performance the bigger the chance to win, players are getting fitter, sharper, stronger, even though we’re a few games behind in that respect so we hope to see improvement and need to, especially from the league games.”