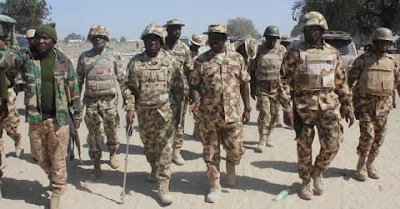 To prevent further destruction of public infrastructure in Lagos State by hoodlums, the Federal Government has deployed more security forces to guard public assets in the state.

Lagos State Governor, Babajide Sanwo-Olu, made this known on Thursday morning while speaking in an interview on Arise TV.

Sanwo-Olu revealed that the Chief of Defence Staff, Gen Abayomi Olonisakin; and the Chief of Army Staff, Lt Gen Tukur Buratai, called him on the phone on Wednesday.

He said the two security chiefs asked to deploy more troops to secure public assets and he said, “Why not? Our airports and other public buildings must be secured.”

There have been reports of widespread arson and violence in the past few days as rampaging hoodlums looted, razed and destroyed public assets.

Sanwo-Olu had announced the imposition of the curfew on Tuesday afternoon in the wake of the unrest in the state.

Hoodlums had taken advantage of the #EndSARS protests against police brutality and extrajudicial killings to wreak havoc and cause mayhem in the state.

Banks, local government secretariats, police stations, the Palace of the Oba of Lagos, Shoprite Ajah, Nigerian Ports Authority head office, the governor mother’s house at Akerele, VIO/Federal Road Safety Corps’ offices at Ojodu, magistrates’ courts at Igbosere, TVC station, the Nation Newspapers office, and many others have been burnt down in the last 48 hours.

The situation was further worsened when soldiers, in a bid to disperse the protesters at the Lekki toll gate, opened fire on the youths.