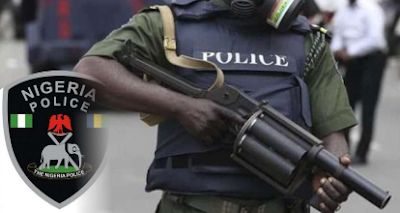 Nigeria Police officers have caused gridlock at Ojuelegba in Lagos.

Eyewitnesses told newsmen at 9:00 am that more than six policemen blocked the road with their vehicle.

They are stationed close to the barracks, stooping traffic flow inward Yaba.

Commuters are apprehensive as the officers took positions with their guns.

The reason for their action is not yet determined. No emergency situation was publicly reported earlier.

“We don’t know why they are standing like that but I didn’t see anything bad happening while coming from Yaba”, said a witness on the other side of the road.

“Some are scared because they pointed guns at people. They crossed the road with their vehicle and are not saying anything.”

Another eye witness corroborated the information.

A Twitter user, @Omo19910, warned citizens to avoid that axis.

“Every one of them came out with guns and crossed their vehicle on the road. Crazy traffic that side”, the tweet read.