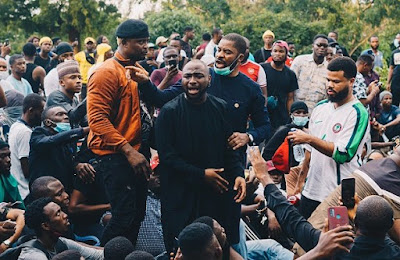 David Adeleke, Nigerian Afropop singer better known as Davido, has expressed his displeasure with the ongoing violence in the country, saying he is “hurt for our generation.”

In a post on his Twitter page on Friday, the ‘FEM’ singer, however, said “it is not finished” while urging Nigerians to get their permanent voter’s cards (PVCs) ready.

“I’m so hurt for our generation, everybody get your PVC ready. It is not finished,” he wrote.

I’m so hurt for our generation

EVERYBODY get your PVC READY #ItIsNotFinished

Recall that the singer had alleged that there were attempts to use thugs to discredit the ongoing #EndSARS protest.

The ongoing #EndSARS campaign against police brutality, which started as a peaceful protest, has since been hijacked by hoodlums.

There have been renewed attacks on government and private properties in Lagos since the shooting of unarmed protesters at Lekki toll gate by soldiers on Tuesday night.

President Muhammadu Buhari, however, addressed the nation on Thursday, 48 hours after soldiers invaded the Lekki toll gate, where thousands of protesters had been demonstrating against police brutality for nearly two weeks.