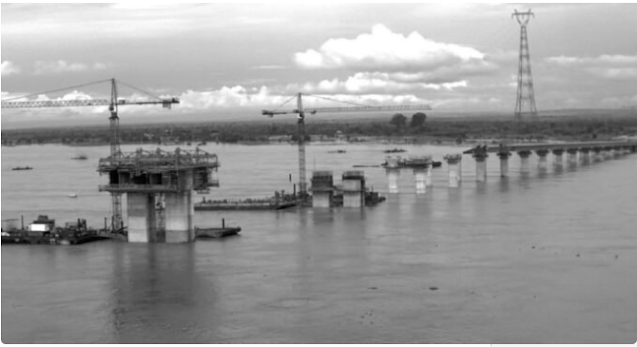 President Muhammadu Buhari has expressed hope that the second Niger Bridge will be commissioned before the end of his tenure in 2023.

Speaking while presenting the 2021 budget to a joint assembly of the senate and house of representatives, Buhari said the bridge has reached 46 percent completion.

The second Niger Bridge project, initiated under the Goodluck Jonathan-led administration, includes the construction of a 1.6 km bridge, a 10.3 km highway, Owerri interchange and a toll station.

The bridge is being constructed across the Niger river and will span from Asaba (Delta state) to Ozubulu and Ogbaru areas in Anambra state.

“The Second Niger Bridge is at about 46 percent completion. We hope to commission the project before the end of our tenure in 2023,” Buhari said.

On rail-way projects, Buhari said the Lagos-Ibadan rail line will “soon” be completed and arrangements are underway to complete the Ibadan-Kano rail line.

“Also, work will soon commence on the Port Harcourt-Maiduguri line and Calabar-Lagos coastal line, which will connect the southern and eastern states to the north, and the south-south as well as south-east to the north, and south-west, respectively.”

He explained that the Lagos-Ibadan-Kano; Abuja-Kaduna; Port-Harcourt-Maiduguri; and Itakpe-Ajaokuta-Warri rail lines, upon completion, will minimize the cost of transporting people and goods around the country.